Coca Cola launched Oasis Mighty Drops in 2014 as part of an overhaul of the visual identity and design of the Oasis brand. Aimed at teens and young adults, the product is Coca-Cola’s first foray into the on the go squash market.

Oasis ran a campaign across 32 Co-op stores in the UK aiming to raise awareness of the product by giving away free samples. The OMD sample tour ran for a few weeks, spending a day or two at each store.

The promotion ran from a pop up stall where brand ambassadors served Mighty Drop samples to the public and encouraged them to get involved with an online campaign in order to potentially win daily prizes such as tickets to theme parks.

The objective for EventBeat was to help raise awareness of the OMD free sample giveaway and tie it into an online campaign that the nation could get behind.

EventBeat created a fun app for an iPad that allowed the brand ambassadors to take photos and immediately have them appear on a screen at the stall. Oasis used this software to encourage customers in the Co-op to get involved with the campaign! At each pop up stall was a box of silly costumes, glasses and wigs for people to try on and pose with a sample of Mighty Drops. Participants were also encouraged to share their experience on social media by tweeting using the hash-tags #Ocheerupwater and #Orefreshwin.

After a photo was taken, it saved onto the iPad EventBeat platform which then prompted people to submit their email in order to enter the daily prize draw. Once entered, the picture appeared on the screen instantly using EvenBeat’s screen cast technology. 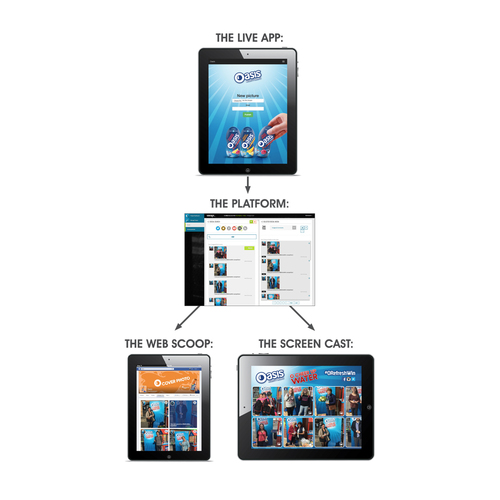 In addition to appearing on the in-store screen, the photos taken with the app came straight through to EventBeat and immediately saved onto our platform. Once on the platform, our moderator approved the best photos to go into a custom web scoop embedded onto the official Oasis Facebook page.

The app also included a portal that listed all the captured images with the email addresses and a 3rd party agency was responsible for selecting the winning pictures. The app enabled the 3rd party to contact the winner directly through the listed email address.

The custom EventBeat software perfectly encapsulated the lighthearted intention behind the campaign and gave OMD the flexibility and ease that they needed to move between stores. As a result of the app, digital screen cast and web scoop, Facebook and Twitter were buzzing with brand advocates showing how much they love the product.